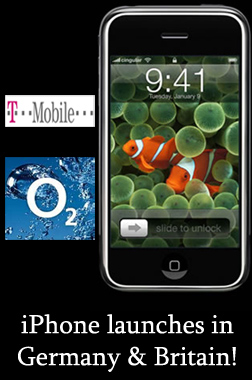 Apple iPhone has finally been launched in Europe particularly in Germany and Britain. Eager buyers queued at midnight in huge numbers to purchase the much-awaited iPhone.

In Germany, iPhone went on sale at more than 700 T-Mobile shops. In Britain it has been sold by O2. In France the device has not been launched yet, but it is expected to reach the market by the end of this month through France Telecom.

According to a spokesperson over 10,000 iPhones were sold in Germany. O2 which provides cell service for iPhones in Britain was unable to release the number of handsets sold.

The cost of iPhone in France is not known as it has not been launched yet.