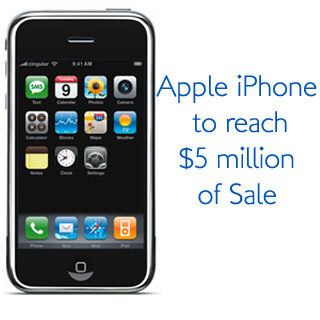 June 29th was the launch date of Apple iPhone, almost 6 months. Now, Apple is all set to announce their aim of selling around 5 million iPhone at the Macworld 2008, held in January 2008, states 9to5mac.

It is said that out of the 5 million targets, the company mentioned that 1 million sales is going to accomplished from Europe itself. However, the country did show a very-low sales figure.

The next goal, after the 5 million mark, is the 10 million mark, which is expected to be acquired by the end of December 2008. By January, Apple will achieve aim of 5 million sales, which is half of their goal.

Earlier, news rolled out on internet that iPhone sales have captured around 27 % of America’s smartphone market in Q4. Apple is soon releasing iPhone in Japan, China, Spain and many more countries.

I strongly feel Apple will surely achieve its aim and announced to 10 million iPhone sold.

In September, just 74 days after the release date, Apple successfully achieved a mark of 1 million iPhone sale. The price cut was the major reason for the increase in sales in US.