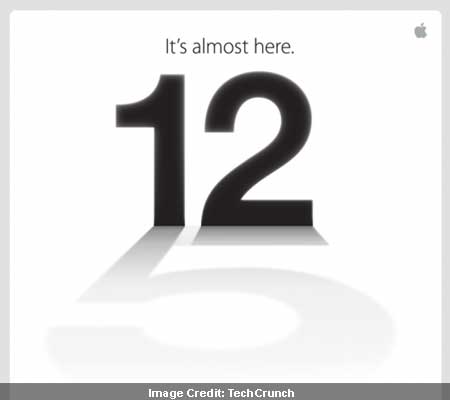 It looks like all those speculations about the iPhone 5 release date falling in September are true, considering that Apple itself has sent out media invites with a tagline that says ‘its almost here.’ Although the company hasn’t mentioned anything about the phone, it drives the point home through clever imagery.

Guys over at TechCrunch who received the invite, are also confident that the media gathering is about the next iPhone. The event is slated to take place at the Yerba Buena Center of Arts in San Francisco, where the conglomerate had taken the covers off its latest generation iPad.

Prospective users planning to grab the upcoming iPhone, may be in for a surprise as Apple is rumored to have changed more than a few things. For starters, it may no longer employ the 30-pin connector that has formed an inseparable part of most iOS devices and all iPhones released till date. Apparently, it will be replaced by a 9-pin port.

Besides LTE connectivity support, the new device may toddle into the mobile segment with a high resolution 4-inch display. A removal back panel may also be in the offing, in order to accommodate bigger camera lens. Apple has even done away with the midplate and the gadget is expected to feature a unibody backplate instead.

But we cannot be too sure about all these suppositions, until Apple decides to make an official announcement. And now that the iPhone 5 release date is revealed to be September 12, we will not have to wait too long to find out.