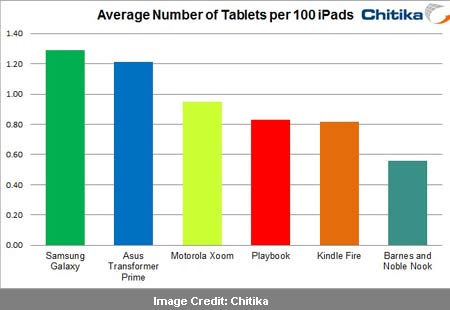 According to a recent report by Chitika Insights, approximately 94.64% of tablet based traffic is eaten up by Apple’s iPad. Though not surprising enough, the Cupertino-based slate has been in the limelight ever since its first generation arrived in 2010.

A survey conducted in this regard revealed that Apple’s iPad boasted of almost 94.64% of tablet based network data. It was followed by the Samsung Galaxy Tab that gobbled up almost 1.22% of web traffic. Stepping into the scenario in the last position was the Barnes & Noble Nook with a 0.53% share.

With the new iPad having made its debut just recently, the scene may be set for a continued rise in sales. The possibility of its market demand going down apparently looks quite remote at present. As the Chitika team puts it, the company has been able to sustain its share amidst the highly competitive market.

As per the other tidbits of this survey, the Asus Transformer Prime rode in third after claiming roughly 1.20% of the meager bit left over by the iPad. Coming in next was the Motorola Xoom, followed by the PlayBook, Kindle Fire and Barnes & Noble Nook.

Asia is cited to be a crucial market for prospective tablet users, including China and South East Asia. Manufacturers are cautioned to be watchful of their market position for staying on par with other mobile devices. South East Asia is supposedly known for its inclination towards Google’s mobile OS, though iPad still rules the roost in the international market.

Chitika hasn’t forgotten to note that according to Gartner, Apple is most likely to sell 148 million iPads in 2015.