Home Apple Apple iPad Air 2 and iPad mini 3 will be available in...

We’ve known about the price tags of the Apple iPad Air 2 and iPad mini 3 for India ever since the two tablets were unveiled for fans across the globe. The 16GB, 64GB and 128GB versions of the both devices have gone up for pre-order through a couple of online retailers finally, answering the question as to when the company will release them here.

Since Flipkart and Infibeam are accepting pre-orders for the Apple iPad Air 2 and iPad mini 3, it won’t be long before it’s officially launched on these shores. As if you didn’t have enough clues pointing to their imminent availability in the country, one retailer has jumped the gun on this little detail. 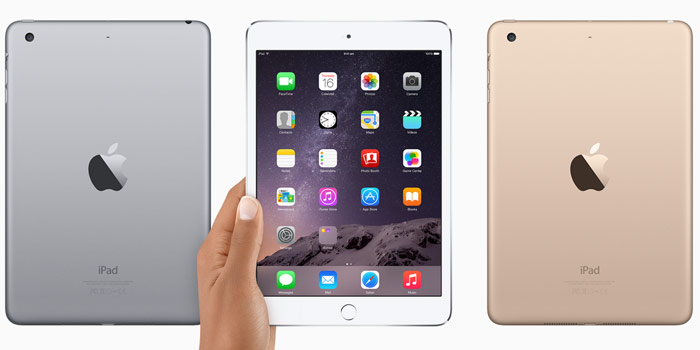 Neither of these iPad devices arrive with 32GB memory, a decision Apple made for the iPhone 6 and 6 Plus first. Running on iOS 8.1, the tablets come with the company’s Touch ID biometric sensor and 2048 x 1536p resolution Retina displays. While the iPad Air 2 is powered by the new A8X processor, it smaller one makes do with the same old A7 chip.

Infibeam is promising delivery of the iPad Air 2 by November 29 itself, providing you live in the cities of Mumbai, Delhi, Ahmedabad, Chennai, Bangalore, Jaipur, Hyderabad, Noida, Gurgaon, Pune, Faridabad, Secunderabad or Nagpur. The 16GB, 64GB, and 128GB variants of the 9.7-inch tablet with Wi-Fi connectivity only, are pegged at Rs 35900, Rs 42900 and Rs 49900, respectively.

You can grab the Apple iPad Air 2 as well as the iPad mini 3 in silver, gold or gray color options.