Home Apple Apple iPad 3 to be launched on March 7? 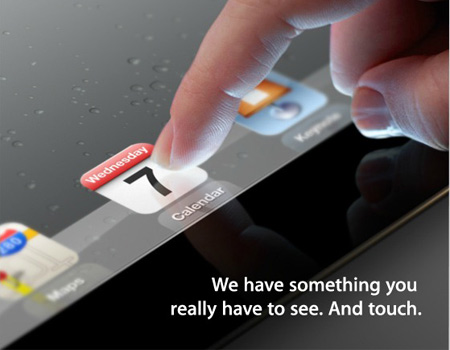 This piece of news could put all rumors pertaining to the next Apple slate to rest, as one of the most anticipated devices of 2012 namely, the Apple iPad 3 is reportedly set to be unveiled on March 7. The Cupertino based company recently gave out invitations for an event, which is scheduled to be held at the Yerba Buena Center for the Arts in San Francisco.

This venue is synonymous with Apple as it had conducted most of its major product launches at the very same place. The invitations in question, sport an interesting picture on their covers. The iPad touchscreen display in the photographs seem to have a much higher resolution than the previous two versions of the famous Apple tablet.

Maintaining the mystery that generally shrouds yet-to-be-released Apple products, the company has not exactly revealed the name of the gadget that it would be disclosing at the upcoming event. Although the tech terrain has dubbed this forthcoming device the iPad 3, the conventional christening is not to be expected from Apple and it could very well bear a different name altogether. As observed in the case of the iPhone 4S, rumors had suggested that it would be the fifth version of the smartphone, perhaps dubbed as the iPhone 5.

According to The Verge, the upcoming launch event is slated to commence from 10am on March 7. If speculations are anything to go by, the third version of the popular and stylish Apple tablet will come integrated with a Sharp IGZO display which is most likely to have a screen resolution of 2048 × 1536p.

For Apple fans already rubbing their hands in glee, a little patience until March 7 will reveal details about the alleged iPad 3 release date and price.