Apple has officially rolled out iOS 10.2 for iPhone, iPad and iPod touch devices. It brings with it an important SOS feature complying with the Indian government’s directive which requires an emergency button to be present on all smartphones sold here starting from 2017.

Beginning from January 1, India will have helpline number 112 that will take all emergency calls and connect the person in need to the right department. It will solve the problem of the confusion (100 for police, 102 for ambulance and so on) people face when trying to reach the correct service.

The nation’s telecom regulatory authority has approved of the decision to gradually phase out other emergency helplines across the country in favor of the all encompassing 112 number. Handset makers have been ordered to ensure their devices have a panic button connecting to this service starting from 2017. 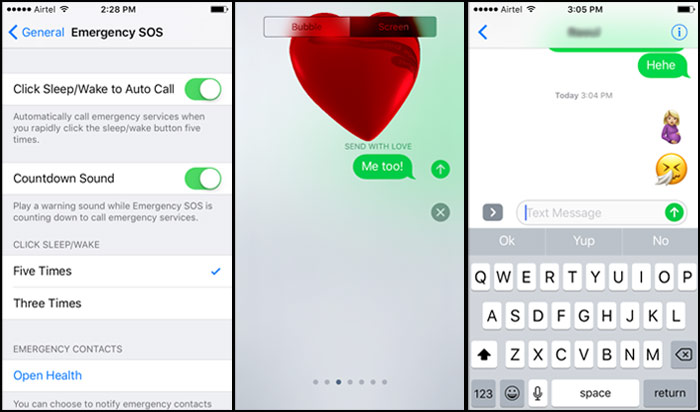 Apple’s iOS v10.2 update hooks users up to the helpline automatically when they rapidly press the Sleep/Wake key at the top five or three times. A countdown offering the chance to stop dialing 112 appears when the panic button is triggered. The number of clicks required can be adjusted by going to Settings > General > Emergency SOS.

This section also provides the option to toggle the warning sound on/off while the countdown is being played. Emergency SOS came to the Apple Watch in September, by the way. Of course, the other big news is that Apple has added no less than 100 new emoji to its already extensive roster of images-that-let-you-get-away-with-not-typing-actual-words.

Even the old ones have been redesigned to show off more details than before. The latest version of iOS has given iMessage a couple of extra effects covering an animated heart (Send with love) and glitter dust (Send with celebration). This feature can be accessed by long-pressing on the small circle with the upward pointing arrow which appears in the input box.

Another key addition is the ability to ‘Preserve Settings’ to the last used mode so that users don’t have to keep switching modes every time they open the Camera app. Those who’ve got an iPhone 7 or 7 Plus will find new wallpaper options. Some other fresh tweaks include a TV app (US only), enhanced music controls and a Videos widget.

Go to Software Update from Settings on your Apple device to download and install iOS 10.2 over Wi-Fi or cellular. Latter not recommended unless you have a cheap and fast data plan.