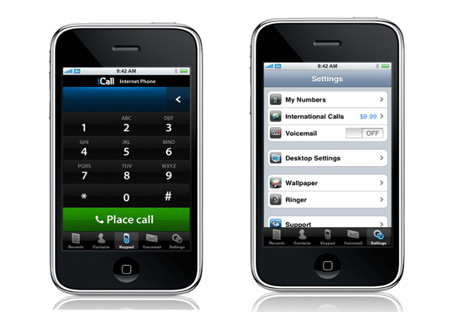 iCall is said to be the first and only VoIP application that can run on the iPhone as well as iPod Touch over cellular 3G networks. iCall is claimed to be leading the market in desktop and mobile-based desktop calling platforms, counting it’s extremely well-known version for the iPhone. So far, limitations forced on developers seemed to forbid VoIP functionality on any 3G network.

iCall CEO Arlo Gilbert, commented, “I applaud Apple’s decision to allow iCall to extend its functionality beyond Wi-Fi and onto the 3G networks. This heralds a new era for VoIP applications on mobile platforms, especially for iCall and our free calling model. I hope that now more developers will begin using our VoIP as a platform to integrate VoIP into their applications.”

Apparently, VoIP on the iPhone has been the basis of several debates with companies like Google being deprived of entering the platform and the FCC inquiring as to the constraints in the Apple App Store. Supposedly, iCall is claimed to be one of the few VoIP applications that has been allowed by Apple to function on the iPhone platform.

By means of the newest updates Apple has crafted on the iPhone developer agreement and Software Development Kit, iCall for the iPhone now facilitates unhampered free local and long distance calling via 3G data networks. From the Apple App Store, one can now download the iCall which supports VoIP over 3G networks.