Texting off the record is an idea which makes you wonder why no one thought of it prior to the folks who made Ansa, a new app aimed at erasing the online as well as offline footprint of your text messages. This new software has been aimed at those who take their privacy seriously, and it has been made available for download on iOS and Android devices.

Ansa was launched recently at a hackathon event held by TechCrunch, called Disrupt SF. This messaging application comes equipped with an ‘off the record’ feature which does the trick of erasing your messages. Once you send a text to someone with this mode on, it will be erased exactly 60 seconds after they’ve read it. And for those who wouldn’t want this to happen during certain instances, there’s the ‘on the record’ option as well. 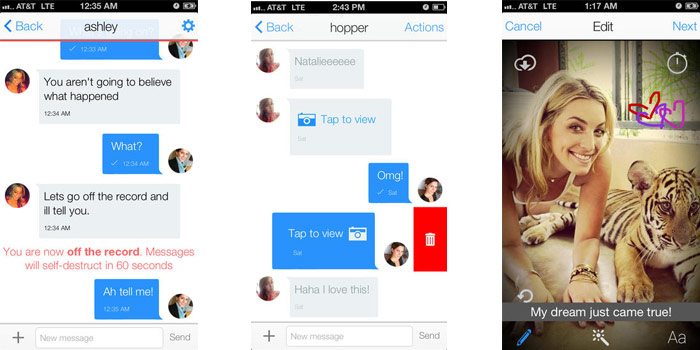 Moreover, just like Snapchat, images and videos can also be sent using Ansa. Another interesting trait is the fact that it allows you to delete certain messages of your own, even after you’ve sent them. This is made possible by its synced deletion technique. Additionally, you can even add filters and doodles on pictures before sending them.

Ansa allows you to quickly search and share Google images and YouTube videos, while it lets you create drawings as well. Comparisons with Snapchat are unavoidable, but the said app has its focus set only on images and videos.

Coming back to Ansa, you can try it out now as it’s free to download for both Android and iOS. Here’s its Play store link and its App store link.