13.6 percent of all Android smartphone and tablets combined are now running the 4.4 KitKat platform. According to new data which has just been released by Google, the latest version of Android OS has finally beaten Ice Cream Sandwich, but it has of course not been able to challenge the Jelly Bean variant which occupies space on most of the affordable smartphones from around the world.

This release of data seems quite like an answer to Apple’s revelation at the ongoing WWDC of iOS 7 being present on 89 percent of all iPhones, whereas Android KitKat only possessing a 9 percent installed base. According to numbers release by Google, between May and June Android 4.4.x KitKat rose by 5.1 percent to reach 13.6 percent from 8.5 percent. 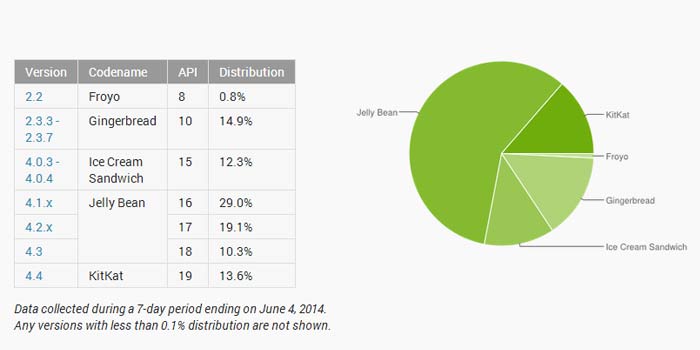 Right now, it is this particular version which occupies the largest share in the Android devices arena. As expected, adoption of Android 4.0 Ice Cream Sandwich has decreased by 1.1 percent, and it now occupies space on just 12.3 percent of all Android devices worldwide.

As compared to iOS, Android updates face delays and are cancelled for many devices due to fragmentation. KitKat’s rise will come as good news to Google since that means more devices become eligible for its rumored 4.5 or probably 5.0 Lollipop update that’s apparently slated for this year.