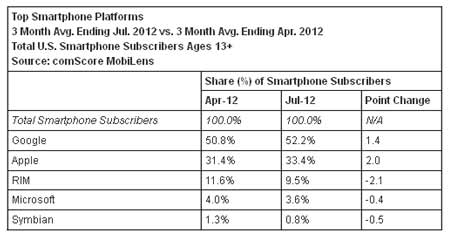 As per a recent comScore report, Samsung has eaten up almost 25.6% market share in terms of the top handset manufacturer. With regards to platforms, Android persists to lead with an overall 52.2% subscribers banking on it. Apple managed to secure 33.4% of the total amount.

Talking about the most popular OEM, LG followed Samsung with 18.4%, while Apple came third with 16.3% mobile users on its side. Motorola and HTC gobbled up the fourth and fifth positions with 11.2% and 6.4%, respectively. Coming back to operating systems, RIM was the third to trail along after Android and Apple with 9.5% market share. Microsoft and Symbian grabbed the fourth and fifth positions with 3.6% and 0.8%, correspondingly. 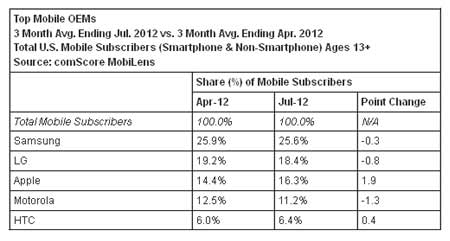 With respect to content perused on smartphones, 75.6% of US mobile subscribers engaged in text messaging, while 52.6% of them downloaded apps and 51.2 % wielded browsers. The number of people using blogs or social networking sites increased by 1.9 percentage points with 37.9%. Games were played by 33.8% of mobile users that has increased by 0.7 percentage points and 28.3% streamed music on devices. 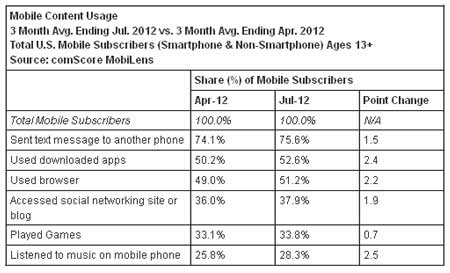 This report has arrived after extensive surveying of more than 30,000 US mobile subscribers in the three month average duration that ends in July 2012. In the study phase, approximately 234 million individuals in America aged 13 and above made use of mobile devices. As far as we can see, Apple and Samsung seem to be in close competition with respect to the mobile market share.

This analysis is part of the comScore MobiLens service.