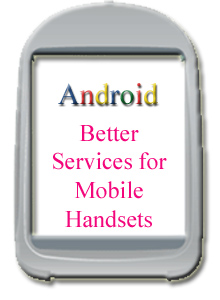 In the initial week of November, a broad association of leading technology and wireless companies joined forces and announced the development of Android, the first truly open and comprehensive platform for mobile devices. Google Inc., T-Mobile, HTC, Qualcomm, Motorola and others have collaborated on the development of Android through the Open Handset Alliance, a multinational alliance of technology and mobile industry leaders.

There are about 3 billion users worldwide for which mobile phone has become the most suitable and ever-present communications device. In this highly populated world of users, mobile phones have to be the best to use and perform. Thirty-four companies have formed the Open Handset Alliance that share a common goal to develop technologies that will significantly lower the cost of developing and distributing mobile devices and services.

The Android platform is the first step in the direction to create a difference in the mobile world. It is a fully integrated mobile “software stack” which consists of an operating system, middleware, user-friendly interface and applications.

Developers are provided with a new level of openness enabling them to work more collaboratively. However, the lack of a collaborative effort has made it a challenge for developers, wireless operators and handset manufacturers to give quick results to the ever-changing needs of regular mobile consumers.

Android will accelerate the pace at which new and compelling mobile services will be made available to mobile users. Through Android, developers, wireless operators and handset manufacturers will be better positioned to bring to market innovative new products faster and also at lower cost.

The end result will be a unique mobile platform that will enable wireless operators and manufacturers to give their customers better, more personal and more flexible mobile experiences.

Android holds the promise of unprecedented benefits for consumers, developers and manufacturers of mobile services and devices. Handset manufacturers and wireless companies aim for developing innovation on mobile devices so they can provide their consumers with a far better user experience compared to what is available in today’s mobile platforms.

The release of the first phone based on Android is expected to be available in the second half of 2008.