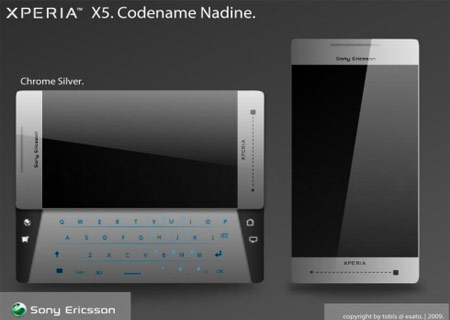 With a codename Nadine, the Xperia X5 carries apparently packages ultramodern features. Reportedly, the Xperia X5 Nadine features a futuristic QWERTY slider keyboard. The concept phone incorporates a 3.5-inch touchscreen. One feature that would be much appreciated is the 12 megapixel camera that offers auto-focus and Xenon flash functionalities.

The Xperia X5 Nadine would also allow users to enjoy HD video recording capability. Further, the Sony Ericsson concept phone may offer access to Sony Ericsson’s App Store. The handset would be offered in diverse color combinations like chrome silver, ocean blue and sunny orange. Apparently, the Xperia X5 Nandine incorporates all the features that one would expect from the future Sony Ericsson Xperia smartphones.

It seems that there is still a long way to go for the Xperia X5.