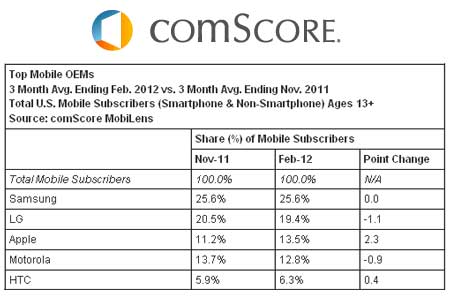 A study conducted by comScore MobiLens in the US goes on to reveal that Google Android has managed to lay its claim on more than 50 percent of the US smartphone market share. The research also reveals that Samsung has grabbed the position of the top manufacturer by acquiring 25.6 percent of the total market share.

The study took into account more than 30,000 US mobile subscribers over an average three-month period that ended in February 2012. After Samsung, which leads with 25.6 percent market share, the second position has been given to LG with 19.4 percent share. Apple, Motorola and HTC follow suit with 13.5 percent, 12.8 percent and 6.3 percent market share, respectively. 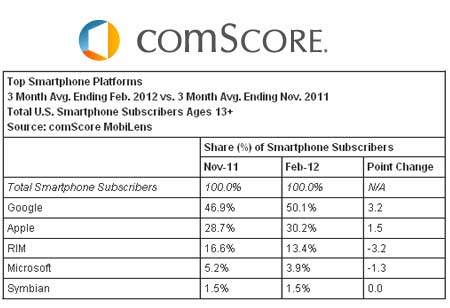 The number of people owning smartphones in the US increased by 14 percent in this term as compared to the period that ended in November last year, bringing the total to 104 million. The Android OS witnessed a 17 percent increase from February 2011, to cross the 50 percent milestone in Feb 2012. Apple followed with 30.2 percent, while RIM, Microsoft and Symbian managed 13.4 percent, 3.9 percent and 1.5 percent share, correspondingly.

According to the comScore MobiLens reports, Android and Samsung seems to have led the pack for a period of three months.