Microsoft has inked a deal with Amazon India that will see it offering the Xbox One console as well as its entire Interactive Entertainment Business portfolio of gaming products through the online retail giant. The console has been put up for pre-order through the e-commerce website and it’s being sold in two bundle options.

The basic Xbox gaming bundle comes with the Xbox One, a wireless controller, a headset and a free copy of FIFA 2015. The second Xbox One package tags along the Kinect sensor and the Dance Central Spotlight title as well. The former option is being offered by Amazon.in at a price of Rs 39990, while the latter bundle will cost you Rs 45990. 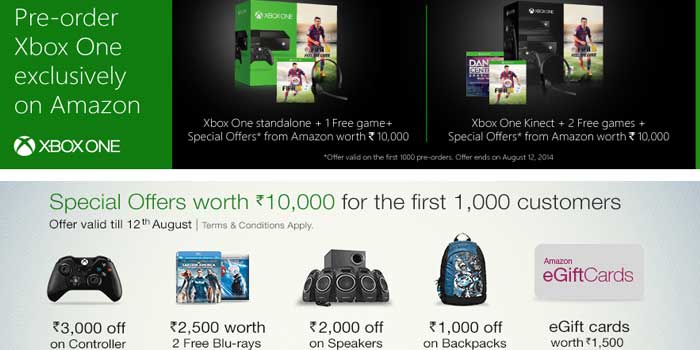 Additionally, you’ll also be able to pre-order extra controllers and other Xbox One games such as Captain America – The Winter Soldier and The Amazing Spider-Man 2. Amazon is currently running a promotion which will gift huge discounts and other goodies to the first 1000 customers. Buyers can pick up the Microsoft controller with Rs 3000 off the tag and get backpacks for Rs 1000 cheaper.

There are also two free Blu-ray movies being thrown in along with an eGift card worth Rs 1500. The Xbox One model with the Microsoft Kinect sensor is said to enable various features such as Skype video calls, gesture controls and biometric sign-in amongst others. But do note that using the console without the sensor is reported to bring in improvements with regards to performance.

The standalone Microsoft Xbox One console can be found by following this link to Amazon.in, while the Kinect edition can be ordered by going here. Both models will be released on September 23 in India and they come with a 14-day Xbox Live Gold trial card.