The Amazon Kindle Oasis has been launched in India and is currently up for sale on the retailer’s website. It’s been slapped with a Rs 23999 price tag here, effectively making it the most expensive e-reader produced by the company till date.

The Amazon Kindle Oasis is also the slimmest device in the series, with the brand declaring that it’s 30% thinner and 20% lighter than the others. It further features an all-new asymmetrical design which tapers to one side. The thicker portion of the gadget is meant as a grip for convenient one-handed holding. 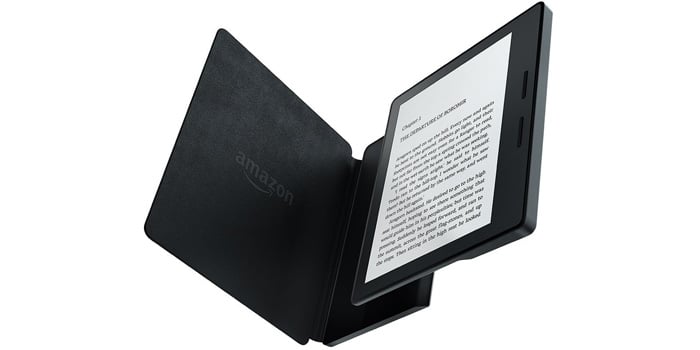 Amazon says this is meant to better replicate the feeling of having a book in one’s hand by shifting the center of gravity to a consumer’s palm. Users have the choice of either using the e-reader’s 6-inch touchscreen to turn a page or the physical buttons on the grip.

The big talking point when it comes to the new Kindle Oasis is its leather cover. The case has its own battery so users can charge the device on-the-go without having to worry about losing power. The combined might of this dual-battery system equals to over 9 weeks of battery life when reading regularly for 30 minutes a day.

Also Read: White Amazon Kindle out in India for Rs 5999

Amazon claims the setup ensures that the device goes on for months in standby. If that’s not enough, there’s also a hibernation mode which cuts down on power consumption when the Kindle is not being used. Specs-wise, the offering has a pixel density of 300ppi and 60% more LEDs than previous entries in the lineup.

You can buy the Amazon Kindle Oasis here.