It’s been a year since the launch of the Amazon Appstore for Android and it’s no wonder the company has decided to celebrate by spreading the cheer. The virtual marketplace will make merry through the week by offering attractive deals on some of the popular applications.

Although the company also announced that it has witnessed millions of downloads in the past year, it hasn’t revealed a specific number like Apple did for the App Store and Google for the Android Market. Titles included as part of the birthday week deal include TuneIn Radio Pro, Tetris, Pac-Man, Fruit Ninja, Wolfram Alpha, Splashtop Remote Desktop, Dr. Seuss’s The Shape of Me and Other Stuff, Monopoly, AccuWeather, The Lost City, Platinum and Jamie Oliver’s 20 Minute Meals. The festivities were kicked off with Plants vs. Zombies selling at a 67 percent discount.

“Customers have used the Amazon Appstore to test drive and buy millions of apps and games for their Kindle Fire and other Android devices in the first year alone,” commented Aaron Rubenson, director of Amazon Appstore for Android. “To thank customers for shopping with us, we worked closely with our developers to offer special discounts on some of the most popular apps all week long.” 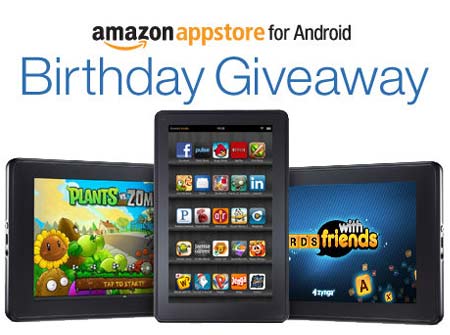 By the end of its birthday celebration week, the Appstore is planning to give away up to eight Kindle Fire gadgets as part of a sweepstake. Customers need not actually purchase any app to participate in this. They can simply take part in the contest by filling out an entry form, just like it was with the one by Apple.

The Amazon Appstore for Android birthday celebrations will continue through March 22.