Home Apple Alice in Wonderland by Disney comes to iPhone 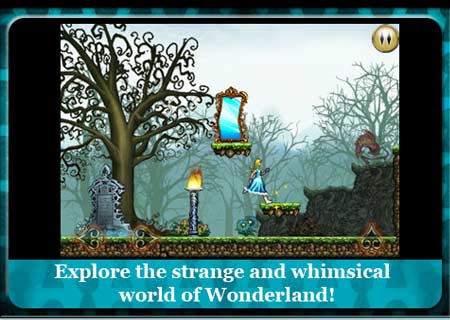 Tim Burton brings fantasy adventure, and magical and imaginative twist on one of the most believed stories of all time. An all-new application, Alice in Wonderland – An adventure beyond the Mirror, by Disney has just stepped in for iPhone users.

Inspired by the highly anticipated Disney film from Tim Burton, ‘Alice in Wonderland – An adventure beyond the Mirror’ brings truly engaging fantasy adventure. Featuring Alice in a puzzle based strategy game, the virtual controls are provided for moving Alice left to right using directional buttons and jump with a jump button, as players encounter magical objects and new characters.

Play as Alice and solve a series of puzzles with help from the Mad Hatter, White Rabbit and other memorable characters from the movie. Explore a world filled with whimsical settings, optical illusions, challenging puzzles, and formidable adversaries.

Players can master unique abilities with the help of Alice’s friends – freeze time with the White Rabbit, make objects appear or disappear with the Cheshire Cat, use the power of Telekinesis with the March Hare, and transform objects from one world to another with the help of Mad Hatter.

Gaming enthusiasts can further unlock hidden objects in Alice’s journal with their GPS, camera, photo library, and by playing the game.

Alice in Wonderland by Disney can now be downloaded for $4.99 from Apple’s App Store.