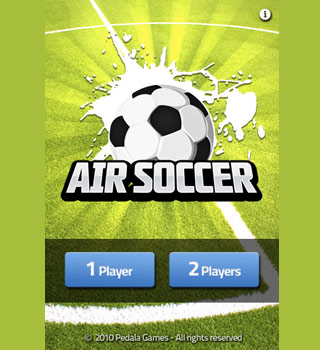 During the FIFA World Cup 2010, an array of applications were released catering to football. Enthusiasts can experience similar excitement through a new application application. Pedala Games unveils Air Soccer 1.0 for the iPhone and iPod touch devices. This application combines the enthusiasm of soccer with the easiness of the Air Hockey game.

Users here have a chance to play with the 32 teams of World 2010 Championship which includes USA, Brazil and the world champion Spain. The application drives gamers through exciting different modes. The single-player mode enables users to play individually with the in-built opponent teams.

This mode is intelligently designed and makes the game utmost difficult as per the behavior of real world. Users can play against their friends who use the iPhone and iPod touch devices through the two-player mode.

With realistic graphics and sounds, users can feel as if they are in a live soccer stadium. As players take every step, they can hear the crowd while the Vuvuzela plays and blows up after every goal.

The Air Soccer 1.0 can be purchased at a price of $0.99 worldwide through the App store. In Europe and Asia, the application is known as Air Football.