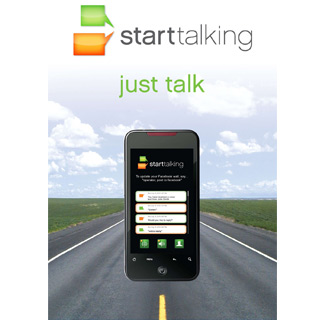 Each time someone takes their focus off the road even if it’s just for a moment they put their lives and the lives of others in danger. Making sure drivers keep their eyes on the road, AdelaVoice has released the incredible StartTalking smartphone application.

The app efficiently functions with the mobile phone’s screen and reduces distraction. Since the app is completely voice-controlled, users can effortlessly speak commands, dictate messages and listen to messages without using the handset manually.

“We created StartTalking to minimize the physical and visual interactions normally associated with creating, sending and receiving text messages,” commented Chris Hassett, AdelaVoice CEO. “We believe that it is every driver’s responsibility to stay alert and minimize distractions while driving. When used properly, StartTalking can be an excellent tool to help drivers meet these responsibilities.”

Users will have to call out their mobile phone’s pre-assigned name which will trigger the handset and start a dialog as the user dictates and sends text messages. The newly unleashed app functions with wired headsets or the Android phone’s speakerphone feature.

Shiv Bakhshi, founder and principal analyst of Mobile Perspectives, remarked, “The distractions that mobile phones can cause drivers are fairly well understood and have prompted formal restrictions in several states. Any technology or solution that helps minimize such distraction should find a welcome audience.”

Besides sending text messages, StartTalking accurately creates audio recordings in a specific user’s voice and effortlessly sends them to other smartphones via AdelaVoice’s Short Voice Service. SVS messages claim to be 100 percent precise.

The app lends support to smartphones powered with Android 2.0 or later and can now be purchased from the Android Market.