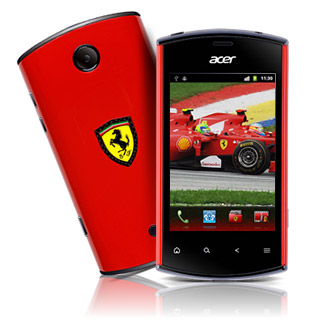 The Acer Liquid Mini which launched last year has now been re-released in the form of a new Ferrari edition. The Acer Liquid E smartphone had also been disclosed previously in the same racing car theme.

From the official Acer page, the smartphone appears to have been coated in the signature bright red design and embellished with the carmaker’s iconic shield. It comes equipped with a 3.2-inch HVGA capacitive multi touchscreen possessing a 320 x 480 resolution and 512MB of RAM. Powered by a 600MHz processor, this handset embeds a 5MP camera.

Running on Android Gingerbread, this device features an 8GB microSD card as well. An exclusive Bluetooth headset accompanies the signature smartphone which seems to be a must have for F1 racing fans.

Users are provided with pre-loaded Ferrari-themed ringtones, wallpapers and the SocialJogger app which offers access to the automaker’s official Facebook and Twitter pages. Weighing 105g, this handset has been crafted with a curved back for perfectly fitting in users’ hand. It was recently presented at the IFA this year and features the Acer 4.2 user interface.

It’s almost similar predecessor namely the Acer Liquid E smartphone which was also retailed in the Ferrari theme featured a 3.5-inch capacitive touchscreen. It also came pre-loaded with images, videos, music and wallpaper based on the race car.

Details regarding the pricing and availability of the Acer Liquid Mini Ferrari Edition smartphone have not yet been revealed.