Acer’s booth at the Las Vegas Convention Center where the CES 2014 is currently taking place has some great tablets on display such as the Iconia A1-830, Iconia W4 and Iconia B1. The W4 in the range was launched in India last month and it is the only one amongst the three to make the most of the Windows platforms. The other two gadgets operate with the assistance of the Android OS.

First up is the Acer Iconia A1-830, the newest kid on the block that comes packed within a chassis featuring an aluminum metal back cover. A 7.9-inch LED-backlit touchscreen complete with the IPs technology rests o the front panel and the slate brings dual cameras to the table. Based on the Android Jelly Bean 4.2.1, the device is powered by Intel Atom Clover Trail+ Z2560 processor clocked in at 1.6GHz and accompanied by 1GB of RAM. 7.5 hours of non-stop usage time is what it claims to offer. 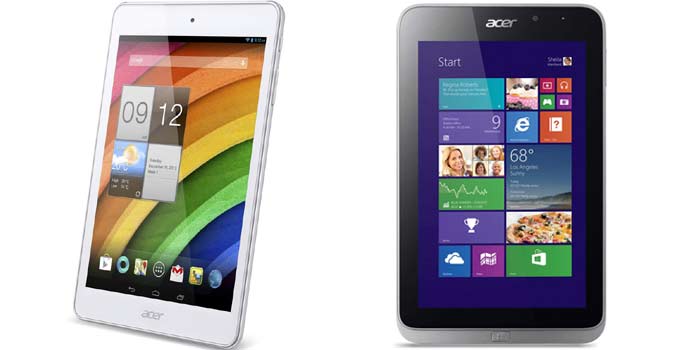 The Iconia W4 takes advantage of the Windows 8.1 OS and gives you WXGA multi-touch real estate of 8 inches. A quad core 1.33GHz Intel Atom Z3740 processor makes it capable of supporting multiple applications at the same time and it seeks assistance from 2GB of RAM. Interested customers can expect a 5MP camera and a 2MP webcam as well as a 4960mAh battery for power life of about 8 hours.

Coming to the Iconia B1, it is a mid-range 7-inch tablet that gains steam from a 1.2GHz dual core MediaTek processor and 1GB of RAM. The Android Jelly Bean 4.1-based device brings a webcam along and boasts of a 2640mAh battery as well.