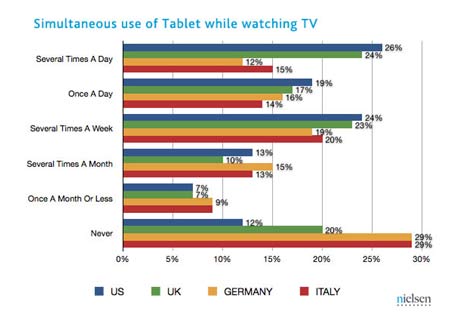 A recent report from Nielsen suggests that a substantial number of people use mobile devices while watching TV. The study was conducted across regions covering the US, Germany, the UK and Italy in Q4 2011.

In terms of the main findings, about 88% of tablet users admitted to tinkering with their slabs while watching TV for a minimum of once during a 30-day timeline. Along the same lines, about 86% of smartphone owners used their devices during the course of watching TV.

Approximately 45% of tablet-toting respondents in the US claimed to do the same on a daily basis, while 26% of them apparently did so many times in a day. Similarly, handsets owners in the US conformed to dual usage, while 41% affirmed that they used their phones at least once while doing the aforesaid activity. 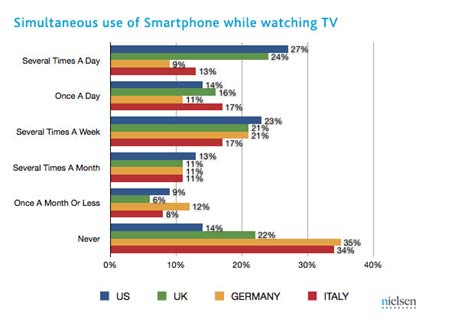 In case of the UK, the statistics showed that it almost equaled the US in terms of using mobile devices and TV simultaneously. This scenario was applicable to nearly 80% and 78% of tablet and handset users, respectively. Almost 24% of the participants agreed they used their device many times while tuned in.

As compared to the aforementioned observation by Nielsen, those from Italy and Germany seemed to adhere to dual usage the lowest. Apparently, 29% of tablet owners in the said countries did not get themselves distracted with a slate while watching TV and 34% and 35% of respondents from these nations did not use their smartphones in a similar fashion.

With respect to the content being explored on the second screen, a lot of people checked mails during commercials. A cluster of respondents used their slabs to get more information about a particular product or deals shown on TV. Some of them even probed into details of the show that was currently being aired.

Taking a hint from this latest Nielsen survey, people certainly seem to be juggling around with more devices than ever these days.