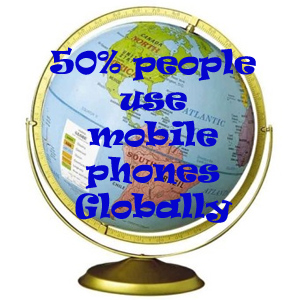 The use of mobile phones is so much these days that after the research by Informa Telecoms & Media it is found 3.3 billion users which is equal to 50% of the population globally are using mobile phones.

Informa has estimated the rise in mobile phones subscription and their report shows the rise by 18 percent from 2.8 billion by the end of 2006.

India and China are the upcoming markets for purchasing handsets. While Vodafone has stated India as the main business center which covers 13 percent only in few years from the beginning.

But actually the mobile phone users are less than 2.5 billion than the subscription figures because there are many users using two to three handsets with different connection.

The research done is however with number of handsets connected to mobile operators and the ones which are in use.