Microsoft has launched the Nokia 230 and Nokia 230 Dual SIM feature phones, with plans to release the handsets in India, Asia and the Middle East by December. The devices are priced at $55 (roughly Rs 3700) before domestic taxes and subsidies.

The Nokia 230 and Nokia 230 Dual SIM are being touted as selfie-focused feature phones. Both the front-facing and rear cameras are equipped with LED flash and have a resolution of 2MP. There’s also a dedicated selfie shortcut key located on the right side of the home screen. Microsoft is bundling the models with a 1 free GameLoft game download every month for a year. 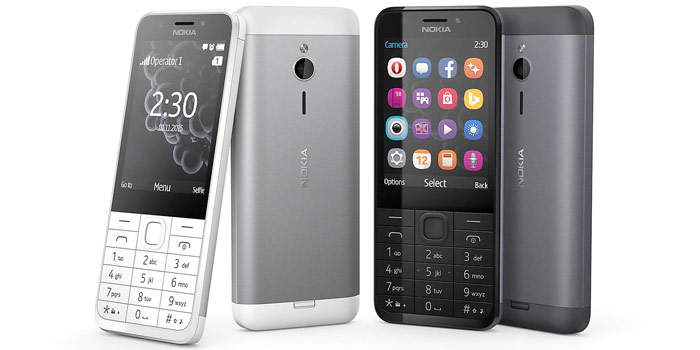 Some of the games available under the offer are Midnight Pool 3 and Assassin’s Creed Brotherhood. Apps can obtained via the Opera Store. The Nokia handsets don’t appear to have any differences except for dual-SIM support. The 230 is encased within a polycarbonate body with a sandblasted aluminum back cover. It houses a 2.8-inch QVGA (320 x 240p) LCD display.

The basic phone runs on the Nokia Series 30+ OS and contains 16MB of RAM. For storage purposes, buyers will have to purchase a separate microSD card (up to 32GB). The new Microsoft offering derives its power from a 1200mAh battery. Both variants are supposed to survive for 23 hours of talk time on 2G. The 230 can go on for 27 days of standby time, while the dual-SIM version lasts for 22 days.

Check out the specifications of the Nokia 230 Dual SIM at a glance:

The Nokia 230 and Nokia 230 Dual SIM will be sold in black and white colors. Once again, the handsets will be arriving here in December costing approximately $55.