The Infocus M808 has been released in India and is now on sale exclusively via Snapdeal for Rs 12999. The newest entry in the series of handsets sports a metal unibody carved out of anodized aluminum.

The brand says it took design cues from the previous member of its flagship lineup for the look of the Infocus M808. As for specs, the dual-SIM phone has a respectable set of features for a mid-range offering. It carries a 5.2-inch IPS screen with a resolution of 1080 x 1920p. 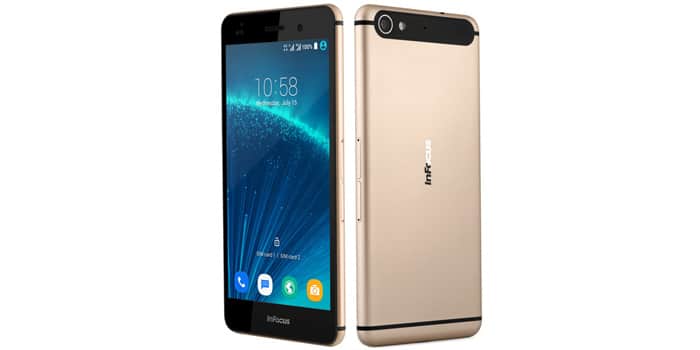 Under the covers, Infocus smartphone is fueled by a 1.3GHz octa-core 64-bit MediaTek MT6753 processer with the aid of 2GB of RAM and a 2450mAh battery pack. The device contains 16GB of internal memory, which can be further expanded up to 128GB via a microSD card slot.

The bottom-facing speakers of the M808 have been equipped with NXP Smart AMP Technology. The enhancement apparently allows for reduced background noise and optimizes audio quality. Coming to its camera capabilities, the device houses a 13MP autofocus rear snapper with an aperture of f/2.0 and LED flash.

A quick look at the main specifications of the Infocus M808:

Selfies can be taken with the 5MP front-facing shooter featuring a 79-degree wide-angle lens. The 4G-ready Infocus phone runs on Android 5.1 Lollipop and measures a slim 157.6 x 77.1 x 7.56mm in terms of dimensions. Connectivity options include Wi-Fi 802.11b/g/n, Bluetooth 4.1, microUSB 2.0 and GPS.

The Infocus M808 will be sold in silver and gold colors. Like we said above, it’s out now through Snapdeal at Rs 12999.